SunRice CEO Rob Gordon, head of Australia’s largest rice supplier, has announced that Australia is suffering a massive shortage of domestic rice supplies and would be forced to rely on imported Vietnamese rice in the lead up to Christmas 2020. 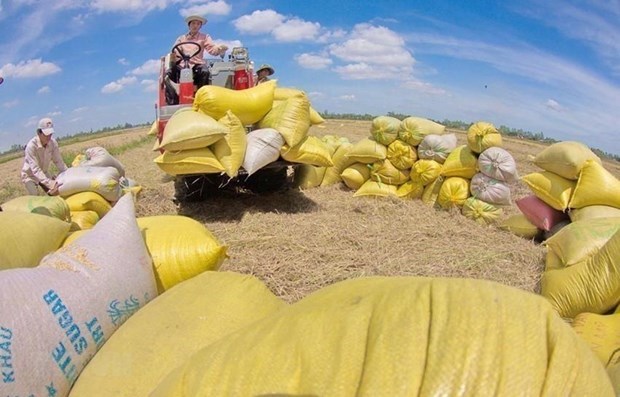 Farmers harvest rice in Vi Binh commune of Vi Thuy district, the Mekong Delta province of Hau Giang (Photo: VNA)
Sydney (VNA) - SunRice CEO Rob Gordon, head of Australia’s largest rice supplier, has announced that Australia is suffering a massive shortage of domestic rice supplies and would be forced to rely on imported Vietnamese rice in the lead up to Christmas 2020.

In an article posted on the website australiavietnam.org, James Fairley of the Australia – Vietnam Young Leadership Dialogue wrote that these announcements emphasise nuances (and fear) of the growing economic fallout of COVID-19, compounded by the impacts of climate change on Australian domestic production. Perhaps more broadly however, such a shortage represents yet another opportunity for Australia in the face of growing calls for trade diversification and integration with new markets.

According to the article, Australia’s rice production remains highly variable due to changing water availability and prices of alternative crops, amounting to merely 0.4 percent of total anticultural production value between 2017-2018. According to the Australian Bureau of Agricultural and Resource Economics and Sciences (ABARES) and the Australian Bureau of Statistics (ABS) 2019-2020 crop yielded about 57,000 tonnes of rice and is, weather permitting, forecast to reach 266,000 tonnes in 2020-2021.  This remains well below the 10-year average to 2018-2019 of 629,000 tonnes.

In any event, ABARES predicts that “fundamental changes in demand for water and relatively low returns for rice production mean that Australia is likely to grow less rice” and turn crops like cotton which have benefited from technological developments and benefited most from the US-China trade dispute.

Founder and Managing Director of agribusiness firm Lefarm Co. Ltd and AVYLD alumni Nguyen Le agrees, stating that “It is a natural movement towards importing more instead of producing more...the real question is, will Australia focus on importing out of necessity, or on forming sustainable long-term strategy to share and co-develop innovations with Vietnam to better align demand and supply when time comes?”

Australians consume about 300,000 tonnes of rice annually, with imports accounting for about half of all consumption – an average of 173,000 tones between 2009-2010 and 2018-2019. Most rice imports are from long grain rice producing countries like Vietnam, Thailand, Pakistan and India, with import’s providing more stable production as opposed to Australian variable domestic production levels.

Australian domestic production variability of rice, particularly in the 2019-2020 crop yield, highlights the increasing demand for alleviation of shortages by imports. As ABARES suggests, in the short term (and given the 2019-2020 yield deficit as above), since domestically produced rice is harvested in autumn - once per year - no new domestic supply will be available in Australia until 2021. Any shortages can only be alleviated via imports.

Vietnam is a key producer and exporter of rice globally and has significantly increased production and exports year on-year, meeting increasing global demand. According to Business Monitor International (BMI), Vietnamese rice exports rose by 30 percent year-on-year in the 2016-2017 harvest due to strong demand by China, the Philippines and Indonesia.

Exports are forecast to continue to rise from 6.1 million tonnes in 2020 to more than 7.86 million tonnes by 2023-2024. This may be driven by Vietnam’s price competitiveness against regional neighbours like Thailand, underscored by Vietnamese government intentions to increase hybrid rice variety production by 50 percent, bolstering future production and export capabilities.

Unlike its neighbours and competitors like Thailand, Vietnam enjoys elevated rice yields as a result of the governments past crop intensification policy, which encouraged farmers to skip crop rotation to maximise production annually.

Nevertheless, Vietnam remains challenged by the increasing water levels in the Mekong Delta, driven by climate change and its impact on soil conditions. These are compounded by issues with sorting and grading, and storage of rice.

Australia’s rice deficit and the growing viability of enhanced trade in rice with Vietnam are strengthened by growing socio-political sentiment about strategic reliance and trade imbalances brought about by the economic consequences of COVID-19.

The impact of a halt to globalisation and economic interconnection (whether through border closures, localised shutdowns of manufacturing and exporting or otherwise) has accelerated calls for a rethink about who, why and what Australia partners with, in trade and innovation.

There are calls for Australia to look beyond its traditional partners in China, Japan, the United States and the Republic of Korea (who together account for 55.5 percent of Australian trade) and towards “growing regions that complement Australian goods, services and expertise, which offer significant potential to diversify”.

Indeed, Australia can expand its relations with Vietnam by driving meaningful mutually beneficial improvements in this industry. Canberra can drive new partnerships in innovation, leveraging institutional knowledge in the Commonwealth Scientific and Industrial Research Organisation (CSIRO), ABARES and others to aide Vietnamese rice export quality and growth to Australia. These Departments can concurrently strengthen existing policy agendas in rice by other Departments like the Australian Centre for International Agricultural Research (ACIAR).

Concurrently, Canberra can support Australian farmers to transition to crops benefiting most from technology like cotton – a sector which has benefited greatly from the US-China trade dispute and a fast-growing import for Vietnam.

In the end, Australia should not view imports from Vietnam as a last resort, but an opportunity for the forging of longer term meaningful links with emerging partners for both countries' sake.
Source: Vietnamplus